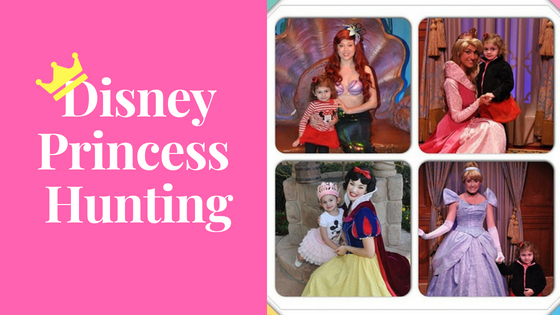 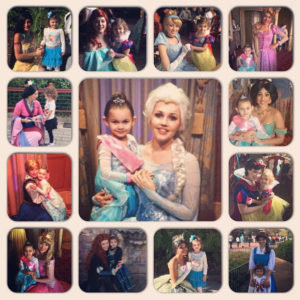 GOAL: Meet all the princesses & Princess K did just that!  #PrincessGoals 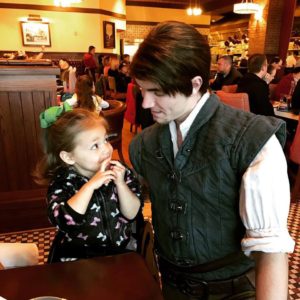 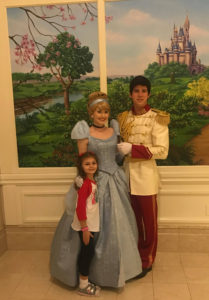 Another way to meet princesses is to utilize your Fast Pass+ options on princess meet and greets. The Magic Kingdom has 3 different Fast Pass+ meet and greets.  At Princess Fairytale Hall, you’ll have the opportunity to meet different princesses.  Cinderella and Rapunzel or Elena and Tiana are typically available for meet and greets during normal park hours.  There are two experiences so you would be meeting two princesses at a time.  The 3rd Fast Pass you can get is for Ariel, as a mermaid, in her grotto.  This is the only place at Walt Disney World where you can meet Ariel as a mermaid. 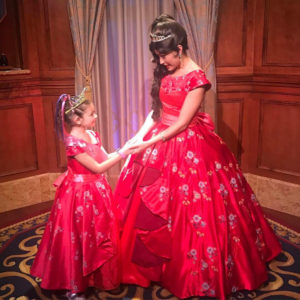 If you want to meet the other princesses, you’ll have to do it the old-fashioned way and wait in line.  It’s always best to get into these lines early. Walt Disney World doesn’t have wandering characters like Disneyland Park so there is always some sort of formal line. The park guide will give you locations, along with the times where they show up.  Here is a list by theme park, as with all meet and greets, these are subject to change and availability:

Besides the Princess Fairytale Hall, you can meet Aurora near the Town Square and Merida at the Fairytale Gardens in Fantasyland.  Snow White’s location at Magic Kingdom can change, so it’s best you check the guide. In Adventureland near the Magic Carpets of Aladdin, you will find Jasmine and Aladdin himself.  Belle has her own attraction, Story Time with Belle, and you will be able to meet her there.  She does not sign autographs but will usually take photos with each child at the end of each story time.

You won’t find any princesses in Future World, as all are in the World Showcase.  Anna and Elsa have their own meet and greet in the Norway Pavilion.  There is no Fast Pass+ for this line and unless you get there early, expect to wait.  The wait is usually between 15 – 40 minutes depending on the time of day and time of year.  There are a few princesses you can meet in their respective country pavilions.  Mulan can be found in China, Snow White in Germany, Aurora in France and Princess Jasmine, along with Aladdin, can be found in Morocco.  Provincial Belle (in her blue and white dress) is also at the French Pavilion.  This is the only location at Walt Disney World where you can meet Provincial Belle.  Meet times are posted at their meet and greet locations and in the park guide. 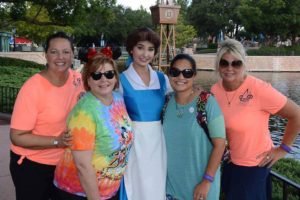 Hollywood Studios is home to the Disney Junior characters, so it is the only place where you can meet Princess Sofia from the animated show, Sofia The First.   There is a meet and greet line for Sofia inside Animation Courtyard.  She can also be found at the Disney Jr. Play & Dine Breakfast at Hollywood & Vine. 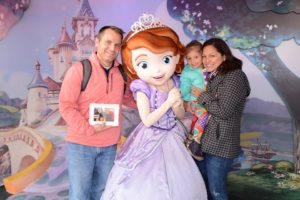 Animal Kingdom is where you will be able to meet Pocahontas and her line can get very long.  It’s best to get there early, if possible.  She is the only princess at Animal Kingdom.

If you are lucky and are at the right place at the right time, you might be able to catch a cast member who is training but these are a matter of luck and are rare.  The best location to find these training cast members is near the entry to the International Gateway between the France and England Pavilions.  Another possible place to meet princesses as well as other rare characters is at Hollywood Studios.  Before Fantasmic!, some of the characters (including some Princesses) might go out and do a quick meet and greet.  These are not announced and locations change, so it’s all a matter of luck! Do not plan your Hollywood Studios day around it!